Rafa in my corner

Some very special gifts have arrived over the past few weeks that I’d like to share with you.  The first was from my new best friend Rafael Nadal (via a very old friend and tennis coach, Steve Storer) – a shirt that says “Cameron, I'm in your corner” and signed by Rafa himself. 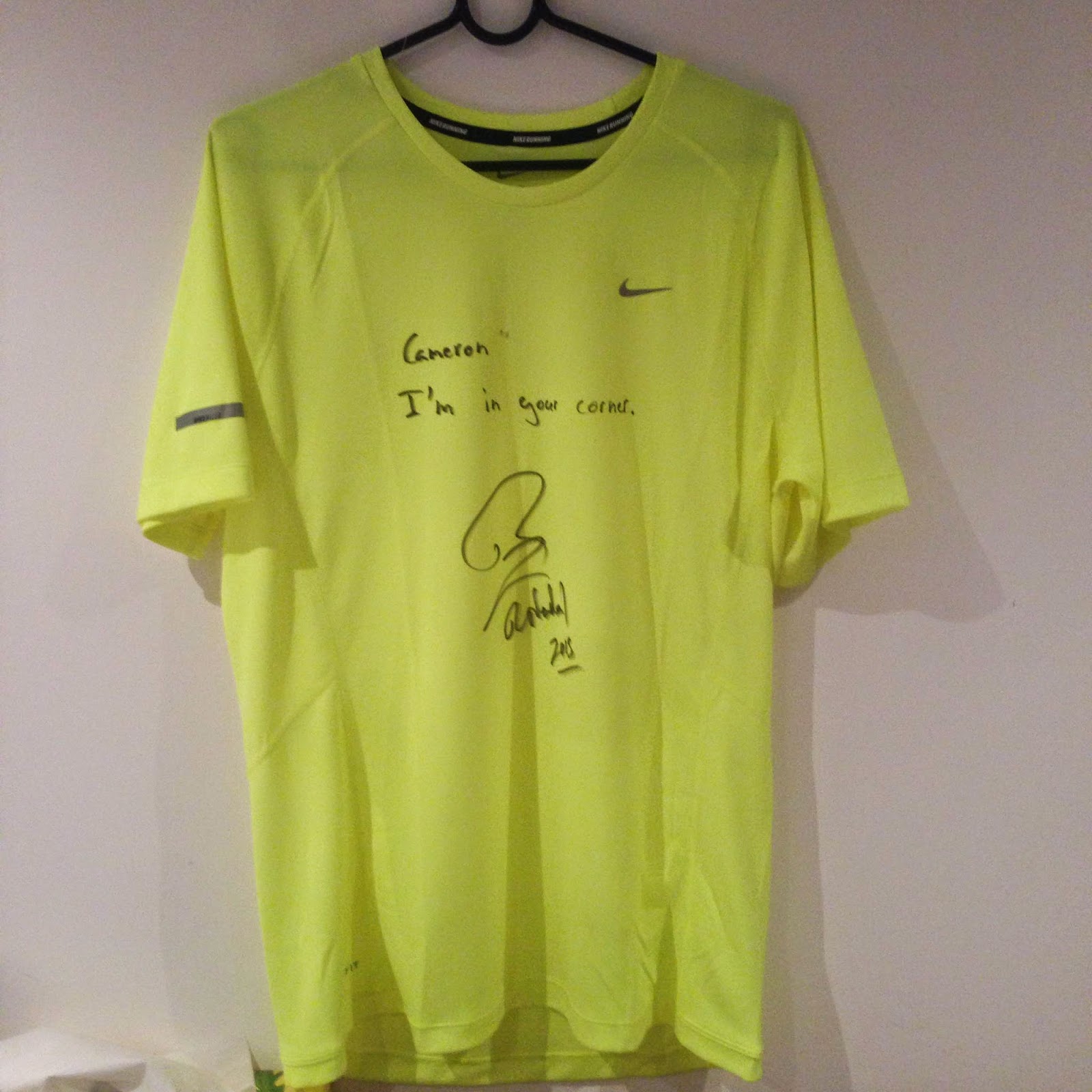 I’m not afraid to admit that I cried when I realised what it was.  It is now hanging with great pride over my bed and will inspire me to fight like Rafa every day.  Steve got the idea to get Rafa to sign the shirt after hearing of my request for a Rafa poster for my hospital room.  He then called in a favour from a friend in high places.  Here he is with the prize at Melbourne Park: 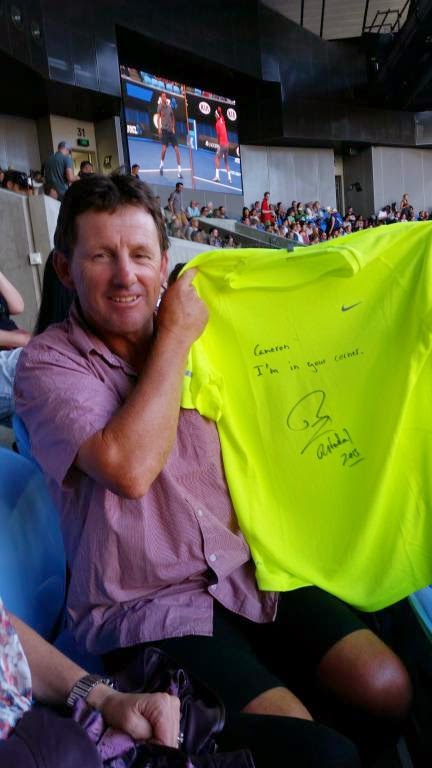 Steve was my coach, mentor and boss for going on 10 years and I owe much to him of who I am today.  I cannot thank him enough for this special gift.  When I was training under Steve I kept a journal where I would comment on my various matches.  When I was 16 I hit a rough patch and fell out of love with tennis.  In my journal Steve wrote the word ‘conjure’ along with its definition from the dictionary to inspire me to find something deep inside.  Little did I know that all these years later I’d find myself needing to conjure up something from deep inside to overcome the greatest challenge of my life.

I like to think that Rafa’s message got truncated from this:

With this shirt I hereby gift to you a little slice of my fighting spirit.  Draw on it when you are when you are feeling down and in need of inspiration.  If there are dark days ahead, just know that we are in this together, 100%.

See you at Wimbledon in 2030 (I will be on the seniors’ tour by then, and as bald as you are today).
Rafa


“The glory is being happy. The glory is not winning here or winning there. The glory is enjoying practicing, enjoy every day, enjoying to work hard, trying to be a better player than before.”


The second gift was from a group of friends who got together and contributed to a personalised recipe book.  It contained 24 recipes including favourites like ‘The Dichotomy Biscuit’ by Sum and Ben, ‘Organic Gypsy Hipster Raw Cacao Balls of Wonder’ by Reuben and Rani Devidas, and ‘Cauliflower Crust Pizza’ by Hammo and Anna.  It also included such novelties as ‘Chickenfish Surprise’ by Nick Potter, ‘Steak a la Ziffer’ (guess who?), ‘witchetty grub’ by Vanessa, ‘Weetbix a la Smally’ by Dave Small and ‘Mouse Tartare’ by Oscar the cat.  The only thing missing were recipes for how to prepare the tumour – although perhaps I could just experiment with adding it to the bbq recipe that the Northern Territory gang contributed or the ‘Gone Troppo breakfast smoothie’ recipe.  Thank you to everyone who contributed and a special thank you to Anna, Hammo and Westy for editing the masterpiece.

I thought I’d showcase some of the other gifts I've received since being diagnosed:


It gives me great comfort that I have so many friends and family in Australia thinking of me and sending me love across the seas.
Posted by Unknown at 22:36