To carry on the theme of Cam’s blog, we’re sticking with tennis and sport in general.
Momentum in the physical world is pretty well understood. p=mv to be precise. (Cam is super smart and will appreciate that.. We had to look it up). Momentum in sport, however, is largely an enigma (known as Psychological Momentum: PM).

If you could bottle positive PM, you would... and you’d take it every day.

Upon hearing the news of Cam first feeling the effects of the tumour in October 2014 (which he mentioned exactly as “Well I’ve had an eventful weekend!”) Team Brown was born and we’ve been trying to keep positive PM going for Cam.

Team Brown’s primary mission is to distract. Not in a nuisance kind of way, but to distract both Cam and Nikki from their day-to-day grind of doctors, appointments, medicines and the anxiety that comes from dealing with a terminal illness.

Whilst Team Brown has arranged many outings and experiences, he has been bombarded with his great love: food. Food was never going to fix his cancer, but it does have a powerful psychological impact on one’s sense of self.

Since Cam’s diagnosis, we’ve all marvelled at his approach and dedication to try anything that might enhance his quality of life. Since knowing Cam we’ve also marvelled at his eating capacity, which is breathtaking to say the least.

Cam has been a vegetarian for as long as we’ve known him and he even had a few stints as a vegan, so it was with a great sense of amusement that he announced that he was going to follow the ketogenic diet (which is mainly proteins and fats). Ketogenic diets reduce seizure activity in epileptic patients and it’s believed it can slow tumour growth - the diet did have a positive impact on the former.

So whilst Cam’s Food Odyssey did actually start quite soon after diagnosis, this article will cover off some of the more memorable moments for Cam since he arrived back in Australia on 14 October, 2015…

“Stuff this Ketogenic diet, bring me a vanilla slice!”
A few days after they landed we arrived at Nikki’s parent’s house to the sight of an incredibly shiny Cam Brown. He’d been off the ketogenic diet for only a few hours and had managed to stuff his face full of as much chocolate as he could find - but what he really wanted was vanilla slice!

5 vanilla slices were presented (and 2 slices of hedgehog) and he downed 3 vanilla slices, 2 hedgehogs all topped with ice-cream. His shiny complexion became more of a sticky feature on his skin and he called an end to the night early as he drifted off to sleep.

The next morning Nikki requested that we don’t bring any more sugary goodness because the sugar farts even kept the dog up all night… plus he experienced an almighty seizure that night as well.

It didn’t take long before chocolate started creeping into his diet. Nikki was trying to get a balance between keeping Cam happy and keeping sugar farts to a low…

Once Cam was admitted to palliative care in November there was a moment of peace for Nikki’s nostrils where Cam followed the ketogenic diet and occasionally indulged on some 98% cocao chocolate.

Coffee was the most requested item and you would be given some evil looks if you didn’t arrive with at least one double-shot flat white. Nikki had to get in early on her coffee otherwise it would be snapped up by Cam quite quickly.

During this time Cam and Nikki were able to enjoy some home cooked meals from family and friends, a highlight coming when Carly and Ange had the ingenious idea to bring in a Thermomix so that Cam could cook a meal for himself.

The inbuilt, computerised recipe book and touchscreen wizardry meant that Cam could do the cooking by pressing a button. That night he was able to treat his friends to a marvellous ketogenic dinner of beef stronganoff, cauliflower rice and a mixed berry smoothie.

The “occasional” indulgence of chocolate turned into a competition with himself, and wow could he put chocolate away. Ange prepared a keto chocolate tart that lasted less than an hour in the room, which then led to the next loading phase.

Whilst this phase obviously climaxed in the now famous 1kg cake eating contest, this phase saw Cam taste and trial all number of cakes and pastries.


Portugese tarts were a favourite, donuts (both supermarket and hipster style), more vanilla slices, baklava, custard tarts, pancakes… you name it - anything that had sugar and butter was now firmly on the menu and being devoured with intent.

As Cam’s ability to speak gradually declined, his appetite seemed to rise to a ferocity only seen by Japanese hotdog eating champions. Old favourites were ordered in plentiful amounts, such as fish & chips, ethiopian and afghani - mixed with plenty of home cooked meals.

Previously untouched fast food was now on the menu:

All firsts for Cam and eaten with glee… and on almost every occasion washed down with some ice-cream.

An old favourite game we used to play was to have a selection of ice-cream’s available at a dinner party, then play a game of Paper Scissors Rock (PSR) to determine which ice-cream you could select. Summer and Ange had such a PSR competition with Cam, who not only won with his left-field strategy of going paper every time - but then demanded to eat all of the ice-creams anyway. His house; his rules.

The highlight
Without a doubt, the highlight of Cam's Food Odyssey was a dinner arranged by Cam himself - a private dinner for Nikki to say thank you. You can read more about it here.

As our dear mate enters his last moments with us we’re happy to have provided him with some moments of joy in an otherwise desperate situation. We’ve done our best to keep some positive PM going - even if it’s Nikki reminding him that a friend is bringing a vanilla slice later that day: it has all helped.

They say that food is the way to a man’s heart, and we feel privileged to have been able to have brought some joy to his last few months. So many friends have contributed to Cam’s Food Odyssey (far more than can be captured in this one post) and Cam & Nikki have absolutely cherished the time with everyone.


On behalf of Cam and Nikki: Thank you :) 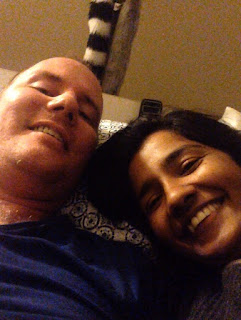