It would be of deep regret for me to not make a contribution to Browny and the Brain, a diary of Cameron’s which we have all read with a variety of emotions during the course of his illness over the past 18 months.  In honour of his current condition, I hope to kick-off his blog for 2016, though I don’t profess to approximate Cam’s wit and intrinsic ability to self-depricate, nor his delicate and unique ability to generate tennis puns…
I have known Cam since 1992, through high school, Melbourne University and beyond.  It is a friendship truly valued, as Cam – as you all know – is a person of the highest calibre.  Growing up effortlessly cool, flamboyant and talented in Bendigo in the 1990’s (who wasn’t?), Cam Brown was that slightly annoying person who was that bit better at everything than you were.  A representative visit to the Victorian table tennis championships (where we were both out of our depth) became bittersweet after Cam was selected as number one seed for our school, me number two.  Cam is the student, who in completing year twelve, got that tertiary entrance rank “a little bit more 99…” than mine was, despite more giggling and more truancy than one would expect of someone so damn smart.  He even holds the hot-lap record time for Luigi Raceway 1 in our after-school Super Mario Kart league of 1994.  Our friendship has evolved as it has been maintained, and I’ve had the privilege of travelling with Cam, including a month with him in Japan.  There we ate the most bizarre morsels together, slept on the floor together, bathed nude together – you know, all the usual stuff.  Bromance truly is a beautiful thing.


I have had many people commend me for the mercy dash to the UK eight weeks ago, though praise is something I would happily do without if it meant Cam had his health.  Besides, last year I asked Cam to visit the cultural backwater of Perth to perform a reading at my wedding, so I guess I owed him a favour.  So with eight hours notice, my bag was packed, work was on hold, and I was up, up and away.
They say that a crisis is something that gets in the way when life is being lived, and Cam and Nikki were both certainly living life to the fullest in London.  As is the usual Cam style, he’d continued his record of overachievement in the early part of 2014, graduating as one of the top of his class in a London Business School MBA!  LBS is not the Frankston Institute of TAFE – the school draws the most impressive students from all over the world.  While in London, I met several of his MBA friends who described with reverence the same Cam we all do – one of great kindness, humour and humility – and bloody smart.
For me, a thirteen-year journey from medical school to the end of specialist training has taught me a lot.  Among them is that the opponent in Cam’s case - glioblastoma - is a shit disease.  Glioblastoma with epidermal growth-factor receptor amplification, an unfortunately even more horrific sub-type, and the most highly malignant, most recalcitrant variant of all brain cancers.  In my work, I’ve witnessed a number of patients grapple with the shock of a poor prognosis.  But hope enables endurance, and a tolerance for hardship ignites courage.  As a human being it’s tough to be invested during bleak times, but as a doctor I also try to maintain a firm grip on reality.  Most tough is when that now impending reality, and all that that entails, involves your best friend.
It may be something of a cancer cliché, but Cam has confronted all recent hurdles with supreme commitment.  However, I’m sure Cam and Nikki would agree that October 2015 was a challenging time with a fairly rapid decline.  Just prior to my arrival, Cam was living in their flat in London, and walking with assistance.  Subsequently, in the days before we left for Australia, he was hospital-confined, hemiplegic, and had exhausted the limitations of all available treatments.  I watched on with an enormous frog in my throat as I saw an overtly frustrated Cam try to raise his right arm to his face – the same arm which was once a weapon on the tennis court, and the source of his famous - and fierce - kick serve.  I met Cam’s consultant oncologist at University College London Hospital for handover.  Like Ange Guest in her thoughtful visit before me, I went over the brain MRI and the chest CT scan.  Tumour recurrence at both neurosurgical sites, causing raised intracranial pressure.  Shit.  Recent massive pulmonary emboli (clots in the lung), causing potentially sudden death. Shit.
Nik and Steve, who worked miracles in arranging the logistics of an antipodean journey for someone so critically ill, deserve the highest acclamation for their benevolent efforts.  Their ability to overcome substantive obstacles made me realise there is an army of people who love Cam and Nikki just as much as I do.  I’m told that there were other airlines which refused to fly Cam to Melbourne on the basis of his illness.  Happily, Qantas came to our aid, though their written instructions to me were just as confronting as those from the team at UCL:  “Dear Doctor… aircraft not to be diverted under any circumstances, including relating to onboard medical emergency or death of the passenger”.  I’ve done medical escort flights before, though this legal caveat would not normally apply.  Armed with enough intravenous midazolam to deeply sedate all 480 passengers on the airbus A380, I took-off from Heathrow with a little trepidation about exactly what that oncologist was anticipating in-flight, but quietly confident the job would get done.  We would get our man home. 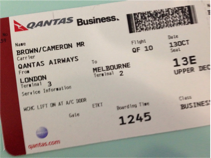 I have known Nikki since 1999, and she is a truly amazing woman.  I remember fondly Cam and Nikki’s wedding in 2011, where Nikki’s parents regaled me with stories as to why Cam was the loving and worthy husband she deserves.  I have continually admired Nikki’s willpower and optimism, particularly given recent adversity.  We laughed together and we cried together in the days we shared in London.  The flight itself was not without hiccups, but despite understandably enormous fatigue and a flux of emotion, Nikki was unwavering in her efforts to care, which have remained constant throughout.  Transit through the enormous airport in Dubai had some challenges, including some moments where Cam’s right to dignity was perhaps challenged, though he and Nikki handled it all with composure.  En route, a highlight was watching Cam tuck into Neil Perry’s business class menu with the appetite of ten men, gourmet coffee in hand.
Medicine has taught me how I can keep a patient alive through a ten-hour liver transplant and I deal with unconscious/seizing/not breathing patients every day, but what my training had not taught me is how to contain my emotions upon entering that arrival hall at Melbourne Airport.  Ultimately, the reunion with family and close friends is what Cam’s journey home was all about.  That journey - just like our 23-year friendship preceding it - is something I will never forget.
I love you mate.
Posted by Nikki G at 13:48